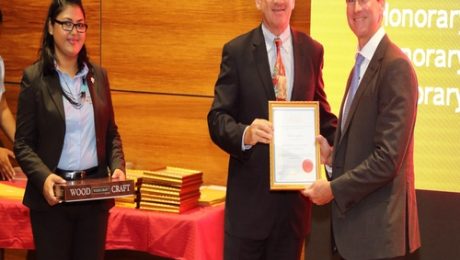 Corporate membership of the Institute is available to licensed banks, licensed investment banks, other licensed financial institutions, regulators of the banking and financial services industry, and other institutions approved by the Board. During the year, the Institute admitted Kina Group as Corporate Members. The table below shows the breakdown by institution categories for 2016.

On the approval of the Board of Directors Honorary Fellowship of the Institute may be conferred upon a person for distinguished service to the Institute or the Papua New Guinea banking industry. In 2016 Honorary Life Membership was given to Mr. Loi Bakani and Honorary Fellow to five elite members as below. 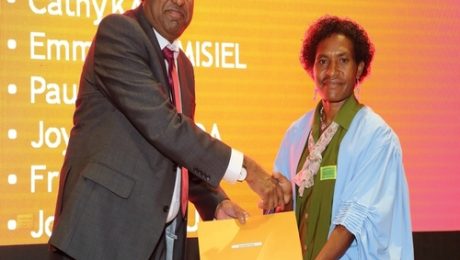 Improving capacity of staff has been a challenge for the micro finance institutions. In order to be successful in a dynamic environment, it is imperative that staff acquire new skills which will enable not only to respond to the changes but also, to build competence in core areas to meet the diverse needs of different customers. Eventually, the success of a financial institution lies in leveraging technology with skilled human resources

IBBM’s 62nd Graduation Ceremony And Inauguration of the NEW Auditorium 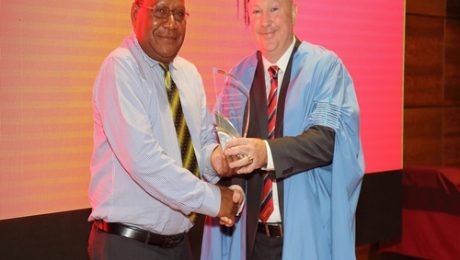 During the year, IBBM initiated a regional Breakfast Series seminar to educate and further enhance banking professionals’ understanding on new developments in the industry. It featured Puan Humairah Sukiman, Senior Legal Counsel of Legal Department, BNM as the guest speaker. She provided an in-depth overview of the Financial Services Act (FSA) 2013, including the Islamic Financial Services Act 2013 as well as other latest insights on the banking industry.

Chairman’s Medal was awarded to Mr. Tony Westaway for obtaining the highest aggregate marks in the inaugural batch of Torrens University MBA program. On this day 10 students graduated from the Torrens University Program with Chifley Business School. It takes 2 years to complete the MBA program with 12 Units. Each Unit is delivered across 6 weeks of duration with three workshops and two assignments. MBA is the most prestigious program on IBBM Portfolio. 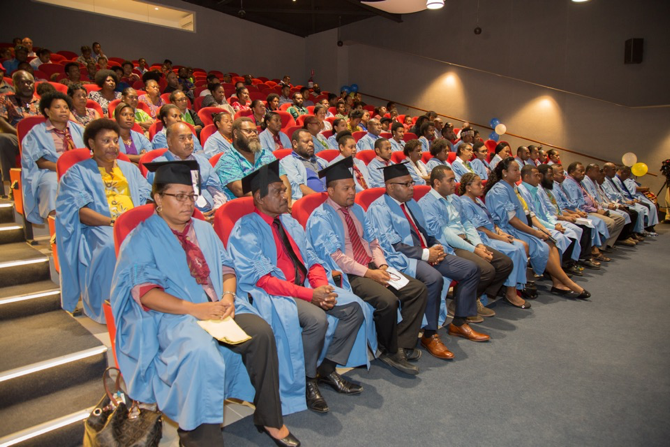 On the occasion of the inauguration, IBBM also held the Graduation Ceremony of our largest batch of 2016 as this year marked our 50th Anniversary of establishment in PNG.

22 to 23 September 2015, New Delhi, India
IBBM actively participated in the APABI Executive Meeting and the International
Conference organised by the Indian Institute of Bankers (IIBF), India on 22 to 23
September 2015 in New Delhi.

The APABI Executive Committee members, comprising leading banking institutes from
Asia, gathered at this event to discuss key developments, issues and challenges related
to talent management in their respective jurisdictions as well as shared views and
experiences to further strengthen and raise the standards of capacity building in the
financial industry. Speakers at the conference comprised both local and international
leading banking professionals, academia and financial consultants. They shared their
experiences and perspectives on the critical issues and challenges surrounding talent
management in the banking industry as well as best practices that can be adopted.

As APABI members host the meetings and conferences on a rotation basis, Nepal
was selected to host the next APABI Conference in 2016. As chair, AICB Malaysia hosted the
APABI meeting and conference in 2012 and 2013 in Kuala Lumpur, PNG. There are
17 member banking institutes in APABI to date.

6 to 8 April 2015, Seoul, South Korea
Held biennially by different financial institutions all over the globe, the World Conference
of Banking Institutes (WCBI) functions as a platform to review the achievements
and challenges which banking and financial institutes face globally, and also their
responsibilities in effectively supporting the financial industry’s performance. Since the
first conference held in Edinburgh, UK in 1975, there have been 20 WCBI Conferences
held in different parts of the world. In 2016, IBBM participated (on webinar)
in this significant conference hosted by the Nigeria Banking Institue.

The PNG LNG Project in partnership with the IBBM Enterprise Centre hosted a Supplier Engagement Summit on the 6 October 2016 at the IBBM Campus.
The main purpose of the workshop was to engage the local businesses and current suppliers with ExxonMobil PNG Ltd.

Major project developers or multinational businesses have certain and specific expectations from local suppliers on one end and local suppliers have different challenges that affect their growth and development on the other end. This workshop provided an avenue for local suppliers and EMPNG Ltd to better understand the challenges and opportunities that are available.

Different speakers from EMPNG Ltd and other stakeholders talked about the different expectations of projects from regulatory to governance whilst a team of panelist discussed in depth the different challenges faced by local suppliers and any opportunities for growth and sustainability in the long run.

“Thank you so much for invite, I really enjoyed the seminar and there were a lot of things I learnt, and hope to apply in our business.” Jayson Karukuru, Director Teconet PNG Ltd.

“… Another key aspect of the forum was understanding the EMPNG expectations for suppliers. This I find particularly important as it raises awareness for local companies who would like to part-take in EMPNG operations. This is good for our local companies so we on par with world standards as quality, consistency, safety is our challenge.
As a team, IBBM Enterprise Centre has exceeded my expectations in your coordination, delivery, though behind time due to speakers, and a spectacular auditorium. I’m sure I’m not the only attendee who was impressed. Excellent work, keep it up!” Sophia Soli, 2015 Kumul Game Changers Finalist. 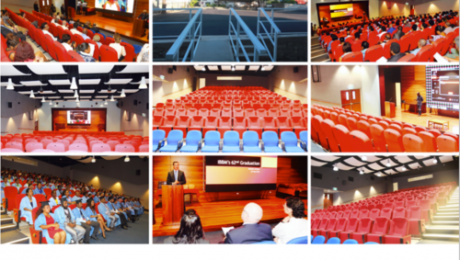 Successful delivery of 6 Million Kina Construction Project in 2 years
Auditorium Project finished with inauguration on 28th May 2016 with 18 months of construction. Projects finished at a cost of PGK6,177,200 +GST which is 7% below the board approved budget. Contingency budget savings was used for sealing the car park at PGK 325,000. Biggest challenge was to maintain quality of construction with subcontractor management within budget and time. Cash flow was carefully managed during the project without any loans drawdown.

Car park In order to cater for additional carpark, the contingency budget savings was used for sealing the car park at PGK 325,000.
Within last 2 weeks of Auditorium completion, the carpark was sealed avoiding the immediate need of 3 level car park project. New car park is utilized now for regular business.

Back Up Generator Project
Backup generator of 300 KVA installation was completed with the Auditorium completion.
Now IBBM has 4 gensets of 50KVA, 100KVA, 150 KVA and 300 KVA. The 300 KVA can take the full load of the campus alone. All others are back up for each building. Complete rewiring was done along the car park and all circuits tested. Guard house was relocated to the front of the road. 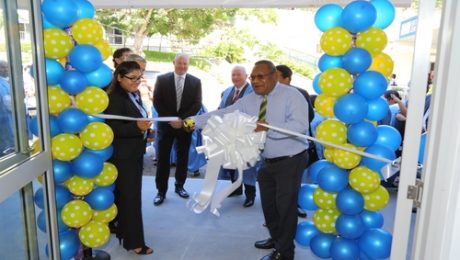 IBBM was delighted to have the gracious presence of 250 guests on the “Graduation and Inauguration of the New, State of the Art 250 seater Auditorium”. The new constructed with a cost of 6 million Kina consists of state of the art with features like:

It was inaugurated by the Chairman of IBBM and Governor of central Bank Mr. Loi Bakani and all Board members of IBBM witnessed the function. The CEO of Exxon Mobil PNG Mr. Andrew Barry was the Keynote speaker. This Auditorium was dedicated to all members of IBBM who are the stakeholders of this Not for profit, Non government organization whose sole purpose is the capacity building of PNG professionals and PNG Businesses. This state of the art facility is open for lease by members for capacity building purposes. 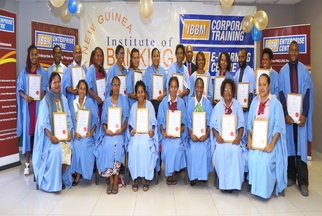 The Institute of Banking and Business Management (IBBM) hosted its inaugural Master of Business Administration (MBA) Graduation with 10 pioneer graduates and a total of 144 graduates in its 62nd graduation. The MBA program which is delivered in partnership with Chifley Business School, Torrens University Australia, is a 2 years program and the first batch graduated in April 2016. The program is taught on IBBM campus via small class intensive teaching sessions and is also offered fully online, or any combination that suits individuals complex life circumstances over the duration of the program. The MBA is designed to provide experienced business professionals with flexible study options to enhance their knowledge and skills and also enhance their career prospects. The MBA has a practical and interdisciplinary focus with the themes of teamwork, sound and ethical decision making, and strategic planning being key features of the program. It culminates in a strategic management capstone project where research skills are consolidated and applied to a strategic business problem.

Board and members of IBBM awarded the Honorary Life Member Award to the Chairman for his distinguished help, support and contribution to the Institute. Honorary Fellow Awards were given to Mr. Giau Duruba (BSP), Ms. Ema Fifita (ANZ), Mr. Joseph Kaiap (Westpac), Mr. Mike Skillington (ExxonMobil PNG) and Mr. Sabine Spohn (ADB) for their distinguished services to IBBM.